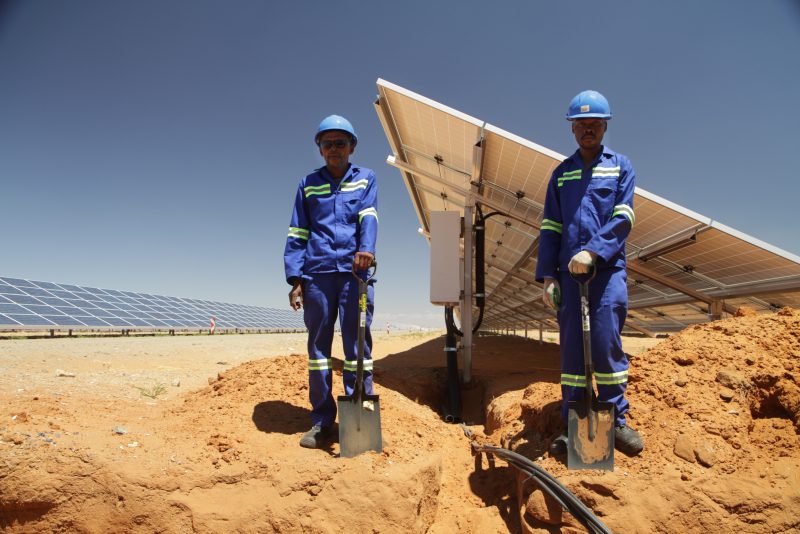 De Aar Solar Power achieved a major milestone this week when it installed its final solar panel.  Over 167 000 solar panels have been installed on the project in the last 5 months, making it one of the few Independent Power Producers of this scale, to reach this construction target in the Northern Cape area.

“We’ve installed exactly 167 580 solar panels by hand since April, which is something that we can be extremely proud of considering the rocky terrain that we’ve had to contend with,” said Savva Antoniadis, Project Manager for De Aar Solar Power.

The sheer volume of these photovoltaic panels installed on this project site can be seen by commuters travelling along the R48.  Whilst large scale solar projects have increased at an exponential rate around the world, this is still very new and unique in South Africa.  “No one on our team has done such a large scale project before,” commented Antoniadis.  He continued saying, “Considering that over 70% of our workforce is from the local De Aar community and have been trained on site, we has much to be proud of”.

During the peak construction period up to around 3 000 modules were installed per day, which is a rate that any solar project can be pleased with.  “This is a fantastic rate, which is comparable to international projects, especially as our staff are inexperienced” added Antoniadis.

During the construction period up to 520 jobs were created, 73% of which were filled by personnel from the local De Aar community and during the twenty year operation period of the solar plant, the project will also create permanent jobs.