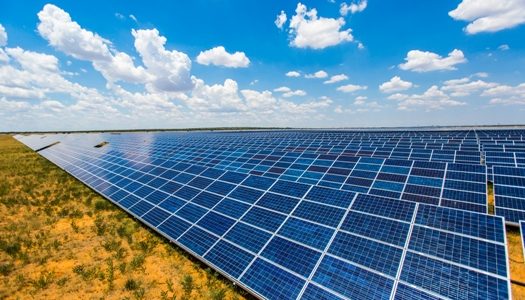 He continued saying, “Over the 17 months of construction the two plants have always been neck and neck. In the end the De Aar team made it to Commercial Operations just a day ahead of the Droogfontein team, on 5 April.”

To commemorate their completion, the projects’ Inaugurations are planned for mid-May, drawing visitors from across the globe, as well as local dignitaries and officials. The Northern Cape was the first province in the country to connect utility-scale photovoltaic (solar) plants to the national electricity grid and expects to play a pivotal role in the renewable energy sector, due to the exceptionally high levels of solar radiation that the region experiences.

South Africa’s widely acclaimed Renewable Energy Independent Power Producer program is now into its third year with most projects from Round One under construction and a handful under full commercial operation.

Droogfontein Solar Power was the first solar plant to supply the Eskom grid with power in the Kimberley area and one of the first solar projects to export power in South Africa. De Aar Solar Power became the only Photovoltaic (Solar) project to export power into the De Aar Municipality line on 3 December. The two Projects will both generate around 85,000 MWh per year, supplying enough clean, renewable electrical energy to power over 19,000 average South African homes.

Not only will Eskom benefit from the additional power being fed into its constrained grid, but the country and indeed the plant will benefit from:

In 2011, the International Energy Agency said that “the development of affordable, inexhaustible and clean solar energy technologies will have huge longer-term benefits. It will increase countries’ energy security through reliance on an indigenous, inexhaustible and mostly import-independent resource, enhance sustainability, reduce pollution, lower the costs of mitigating climate change, and keep fossil fuel prices lower than otherwise”.

“We are most grateful for the support that this project has received from the various stakeholders and local communities and we look forward to a long and mutually beneficially relationship,” concluded Pickering.