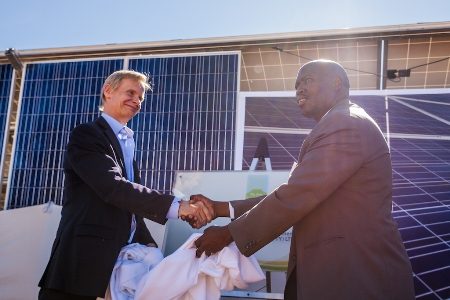 On Wednesday 14 May 2014, De Aar Solar Power, one of the first solar facilities arising from the South African Government’s Renewable Energy Independent Power Producer Procurement Programme (REIPPPP), held an inauguration event to mark the completion of a six year journey, from project development to commercial operations.

The Project, located six kilometres outside of the town of De Aar in the Northern Cape, has now commenced its 20-year operations phase and set in motion its socio-economic development programme to, which will impact positively and without delay on the benefit communities within a 50km radius of the solar farm.

These initiatives are in line with the recent statement by Deputy Minister of Energy, Barbara Thompson, who said, “Apart from the obvious benefits of clean power production and the ability to construct renewable energy projects much faster than traditional power stations, we recognise the potential impact that the renewable energy industry will have on job creation, skills transfer, infrastructure development and economic development, which are much needed in our country.”

Construction commenced in December 2012, employing over 370 local workers at the peak of its construction and achieved full commercial operation a short 17 months later in April this year.

After assessing local socio-economic needs the Project will focus on education support programmes with a percentage of revenues going toward programmes focussed on early childhood development, as part of a crèche support programme; numeracy and literacy interventions at a primary school level; support for mathematics and science programmes at secondary schooling level; and scholarships for engineering-related studies at tertiary level.

“Renewable energy generation benefits both the natural environment and, just as importantly, local communities,” said Mark Pickering, General Manager of De Aar Solar Power. “During construction, we developed skills and created jobs for hundreds of local workers. Now that operations have commenced we will focus on developing the minds of the youth so that they too can make a positive contribution to the economic growth of the country.”

De Aar Solar Power Project will also run an enterprise development programme in the surrounding towns of De Aar, Britstown and Hanover for the full 20 year lifespan of the project. A significant 8% of the project is owned by Sibona Ilanga community trust.

The Northern Cape is host to the majority of the country’s planned solar power plants, due to the exceptionally high levels of solar radiation within the region. The province will be the largest producer of renewable energy (green energy) in the country by 2020. The department of Energy has so far approved 31 projects for the province among which were De Aar Solar Power and Droogfontein Solar Power. Altogether these projects will create over 6,502 jobs during the construction phase and a further 8,736 permanent jobs.