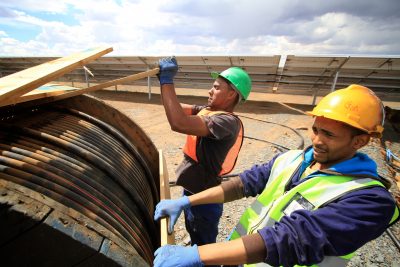 De Aar Solar Power, which has employed over 370 local workers at the peak of its construction, believes that introducing workers from elsewhere will not solve the high unemployment rates currently prevalent in remote areas such as the Northern Cape Province. “Local workers settle down easier during the intense construction periods. They are more familiar with local conditions and have the support of their families, making them better candidates than personnel who are brought in from outlining areas,” added Antoniadis.

During the construction period up to 520 jobs were created, 73% of which were filled by personnel from the local community.  Employment was originally expected to peak at around 300, however, due to challenging ground conditions in De Aar the workforce increased to almost double the original estimate, to ensure that the project can begin operations at the end of March 2014.

During the twenty year operation period of the solar plant, the project will also create permanent jobs, albeit fewer than during the construction phase. Additional indirect jobs have been created for local manufacturers and suppliers during the lifespan of this the project. “Considering that De Aar Solar Power is not the only Independent Power Producer in the area, any employee skilled in this industry will be employable, at any of the current projects or future projects that are to be constructed in the area,” concluded Antoniadis